Some of you are some of the most generous people I’ve ever met, and I want to learn from you how we can create more generous disciples of Jesus. This blog is a starting point for those wanting to grow in generosity.

Sunday’s sermon, “I am Called to Give” was intentionally broad. I did not name the sermon, “I am Called to Tithe,” because that is much too narrow a definition of generosity. This entire sermon series is about cultivating life long dispositions, patterns, habits, and ways of living. Just as there are many different ways we are called to Love and different groups of people we love with different opportunities (family, friends, neighbors, enemies), there are equally variable ways to practice generosity in various situations involving a number of different groups of people.

In addition to commending 10% as a starting place for our giving (Matt 23:23), in one of Jesus’ scariest commands, he even calls us to “give to everyone who asks of you” and “loan to people without expecting repayment” (Luke 6:30,35). Jesus repeatedly tells us to give to the poor and to look after the vulnerable. Jesus’ brother, James writes in James 1:27, “Religion that God our Father accepts as pure and faultless is this: to look after orphans and widows in their distress and to keep oneself from being polluted by the world.”

These are incredible commands that demand a level of generosity that seems beyond approach and outside reality – so much so that they are almost paralyzing. Sometimes it makes me feel like an illiterate person holding the Bible, knowing I should read it, and wanting desperately to read it – but desire and desperation alone will not teach me to read, baby steps of letters and sounding-it-out are the in between.

Likewise God has given us some helpful, concrete steps to grow us in generosity.

So here is Pastor Andrew’s appropriation and application of those steps for the modern person.

Just because you make $40,000 a year does not mean you have to spend $40,000 a year. Instead, intentionally live as though you had less in order to include saving and giving in your budget. Like I joked on Sunday, this will mean you cannot use the “Mortgage Calculators” to estimate the size house you can afford. There are hundreds of historical Christian examples of this. One example is John Wesley, who founded the Methodist Church. Wesley started as a poor preacher without a church, living off his horse and out of a bag. Over the years, he grew to worldwide fame, receiving offerings and gifts from all across Europe and the USA, but he made a decision that he and his family would perpetually, no matter how much they made, like off of the modern equivalent of $30,000. Everything over $30,000 was given to the Church and to the poor. Modern examples of this include Rick Warren (Purpose Driven Life) and Eugene Peterson (The Message) who both work for $1 a year.

Still, you don’t have to start that drastically. The first step towards giving is to MAKE A BUDGET AND LIVE WITHIN THAT BUDGET. If you have a habit of accruing credit card debt, you need to rework your spending. If you need help doing this, find a Dave Ramsey Financial Peace University Course to help.

For now, find one thing in your budget that you do not need, and dedicate that money to the Church. Examples might include TV service, High Speed Internet, Magazine Subscriptions, Landscaping, Clothes, Four-Wheeler payments, Boat payments, etc.

Claire and I practice this by eating at restaurants less, so that we can afford to host our neighbors for dinner more often at no cost to them. We never want to be miss an opportunity to host because we lack resources.

2.) Decide what you will give before you start spending money on WANTS

Giving comes out of our checks first, even before taxes. To remind myself of this truth, Claire and I give a percentage of our Gross Income away, because God gets his cut before the Government gets theirs. I don’t like paying taxes, but I do like many of the things they pay for, including roads, public schools, hospitals, and EMS teams. Still, giving 13% of my income to Uncle Sam seems steep, compared to giving 10% to God, who provides for all I have, who created my life, and saved my soul. 10% seems huge, but is actually paltry in comparison to the percentage of my income forcefully taken from me by the government, who gives me far less than the Lord. That realization alone, makes me so much more grateful and willing to give to the Church.

Let me pause to say, do not tithe on Student Loans, or any loans for that matter. We tithe on our INCOME not on our DEBT.

So practically for those of you who’ve started to complete step one, meaning you are no longer going further into debt. So once you’ve stopped accruing debt, its time to start redistributing your funds from spending to GIVING and SAVING.

I do this right now by starting my budget with gross income, less my hoped giving percentage (10%), less my hoped contribution to savings (7%), less taxes, less expenses and pocket money. If I come out in the negative, I decrease my savings and giving by a point, and rework the whole thing, while examining my expenses for unnecessary costs. Eventually, Claire and I would like to ratchet both the Savings and Givings percentages higher.

Tomorrow I will post more about some Frequently Ask Questions, when it comes to Tithing in particular, so check back.

Remember, who you are and whose you are, 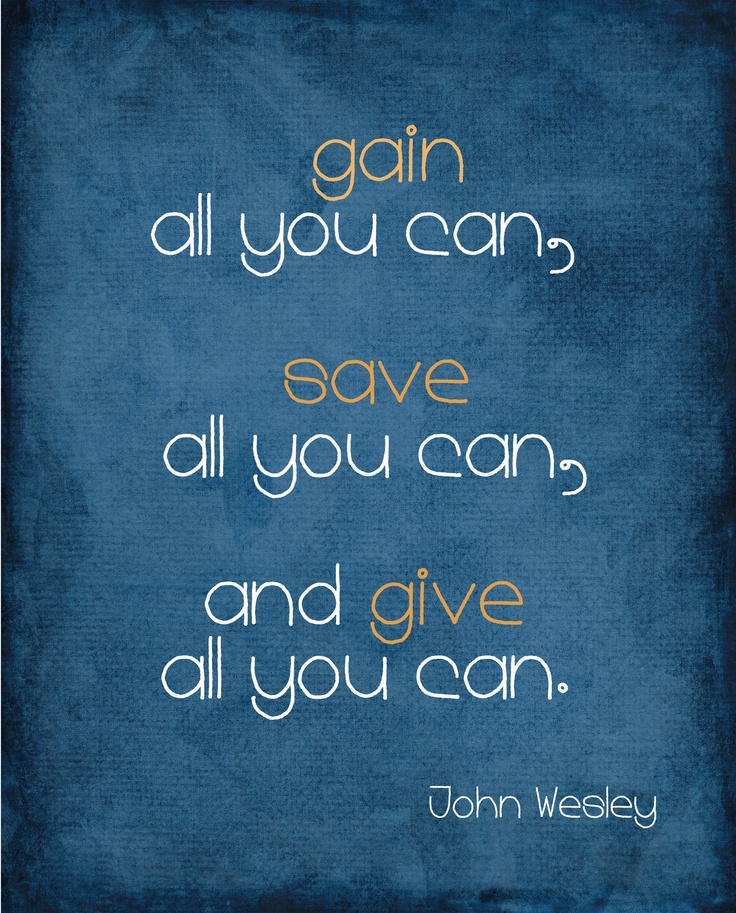 The American Red Cross will be at Oakland on Friday May 28th from 2pm-6:30pm. The need for blood donations continues to be great. Please consider donating blood and helping to save a life. Please use this link to sign up www.redcrossblood.org/give.html/donation-time ...

Sign picture from the Leonard Family: Edward, Liam, Sam and SarahWe are many homes, but one church ...

Anyone doing a little spring cleaning? The office could use a desk so please let us know if you have one or know of one that is in good condition. Thank you!! ...