The greatest threats [to my relationship with Jesus] are the constant BUSYNESS AND FRANTIC HURRY THAT DEMAND MY ALLEGIANCE. - Fil Anderson.

On Sunday I read you several quotes, but this one could not be more important to us:

"If you live in North America, you are a prime candidate for slow death by overstimulation. Your environment is busy depleting you with noise, distractions, and the compulsion to always be in a hurry. If I had set out to destroy my identity as a beloved child of God, I couldn’t have done better than living in America at the start of the 21st century. The greatest threats I’ve encountered are not the arguments of skeptics or the lure of drinks, drugs, or sex. The greatest threats are the constant BUSYNESS AND FRANTIC HURRY THAT DEMAND MY ALLEGIANCE…We rarely are grounded in the present moment (where God is to be encountered) because we’re always rushing out beyond it or replaying in our minds our disappointing past. Shame and sadness over our dark past drive us to strive for a brighter future, which generally winds up being busier rather than better." - Fil Anderson in Running On Empty. 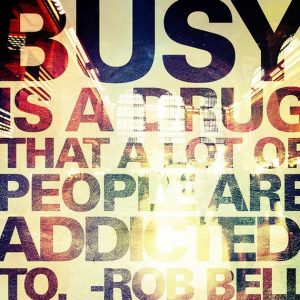 In her book, The Overworked American, Juliet Schor points out that the United States now leads Japan as the longest-working nation in the industrialized world and is the most vacation-starved country in the world.  Americans in general work longer hours with less vacation for more years than any other industrialized culture.

According to Tim Keller, in his sermon "Work and Rest", there are 4 things that coordinate to create this dynamic:

a.) Work security is very low. Whole departments can be shut down if they’re not profitable. There are hostile takeovers on the regular. New technology is making jobs and skills obsolete overnight, making thousands of jobs unnecessary. The pressure to be profitable is stronger than loyalty to employees, and so companies will fire anyone. So we’re staying at our jobs shorter time and we’re not guaranteed to keep our job. Knowing we live precariously, we work harder and harder to prove our value to our employers to increase our job security. Taking time off lets my boss see if she can live without me. Missing deadlines line me up for a dead end. This is exacerbated among the 10,000s start-ups, which operate with a skeleton staff and the risk of failure.

B.) Income Distribution – Those at the top of companies used to make 20-30 times what the lowest employees made, but now that number is 200-500 times. This means that the people at the top are making such astronomical sums of money, they are expected to put in ridiculous hours. If they don’t put in the hours, there is a long line of people waiting to take their job in order to avail themselves of the huge paychecks. At the bottom, people are making less than a living wage, and so they have to take multiple jobs to make ends meet, meaning they are putting in more hours. To justify their paychecks, the people at the top work all the time. To make their bills, the people at the bottom work all the time.

C.) Technology – We can now work anywhere, so we work everywhere. We set up our laptops on vacation. We even carry our cell phones into the bathroom. Do you remember the first time you heard of someone installing a telephone in their bathroom? I learned to fish with a real estate agent at the beach, and I remember the first time we fished together, he was taking calls and answering emails out in the middle of the salt marsh, while wrestling flounders. I thought he was insane, until this summer, I found myself coordinating volunteers and speakers for the ARISE retreat, from a boat in the salt marsh, while wrestling a flounder.

D.) Identity Crisis – More than any civilization in the history of the world, we have dissociated ourselves with that traditional sources of identity. In traditional cultures, your identity comes from your relationship in a family or the community – You are so and so’s son. You are a dad or a mom. You aren't just a blacksmith, but you are THE blacksmith in Clayton or the Barber in Smithfield, forcing you into community and accountability. Now, we are the first civilization in the history of humanity to say, you need to look deep inside you and find your true identity and then your success, your worth, your approval is based on your ability to accomplish that. If you feel like you should be a singer, but you can’t cut it on Broadway or the Billboard charts, then you are a failure and you have no secondary source of worth to fall back on. You have no foundation of self-value to lean into. If you are good at your job, then your worthy, but if not, then you have no value and no secure worth. So we look more and more to our work and our professional success to prove our worth. This is true even of those of you who do not work professionally. Stay at home parenting has turned into a competitive sport in the United States thanks to social media and Pinterest. Retirement competition is a growing fight.

But what is the cure?

The cure is to rest in Jesus. To rest in Jesus is to be completely satisfied with his finished work on the cross. Trust his work, rather than trying to impress him with yours. Get your identity from Jesus not from work. When you do that, you will rest as an act of trust and an act of liberty.

Listen to the whole Oakland Sermon - "Are You Too Tired to Rest?" here.

The Red Cross will be at Oakland today from 2:00-6:30pm. There are still appointments available that you can get by visiting www.redcrossblood.org/give.html/find-drive or stop by and they will work you in. Hope to see you there!! ...
View on Facebook
· Share

Kick off 2021 in a big way: Help save a life & get a chance to go to the 2022 #SuperBowl! To be entered to win, come to give blood, platelets or plasma with the Red Cross at Oakland Presbyterian on January 19th from 2:00-6:30pm. Schedule your appointment & learn more: rcblood.org/SuperBowl ...

SORRY is the balm given to heal the brokenness in our communities and lives, but when we only say, "Sorry" without learning to live "Sorry" by repentance and restitution via amends we do more damage than good. Learn how to live out Sorry.Additionally, we get the privilege of ordaining and installing new Elders during today's service. Elders are not the Hall of Fame of the church, but rather servant leaders tasked with a specific way of living out our common baptismal identity and mission.This service features "Holy Spirit Living Breath of God" by Keith Getty and Stuart Townend used by their permission. Copyright 2006 ThankYou Music ...