How are Plagues Good News?

Off the top of my head, I could not tell you what the 10 Plagues teach us about God other than "don't mess with the boss," but I hope by Sunday, May 17 at 1PM, we all will have an answer to that question. Believe it or not, I’ve never preached through the 10 Plagues, but with the Youth of our Church leading us in a meditation of the 10 Plagues this coming Sunday, I wanted to take some time and think through how these 10 supernatural disasters are in fact “Good News.”

will know that I am the LORD.

My first question about the plagues, is basically, "Why did God send such terrible disasters upon Egypt as a whole and not just on Pharaoh?" Well, to that question, our God says, “Then the Egyptians will know that I am the LORD” (Ex 7:5). The first thing that God reminds Moses is, “I am the LORD” (Ex 6:29). Similar lines appear later in 8:10, “Then you will know that there is no one like the LORD our God,” and 8:22, “Then you will know that I, the LORD, am in this land.” While to modern sensibilities these plagues seem like harsh judgment at best, and cruel blanket punishment at worst, God says again and again that through them, the Egyptians will come to know that YHWH is the LORD. The Hebrew God, YHWH is the one true God who gives life and takes it away. The Egyptians will see this God, and so in a sense the plagues will show both the power and the mercy of a God. The Plagues provide Egyptians, individually and corporately, with an opportunity to believe, to worship, to repent. They will have a chance to worship YHWH or to continue worshipping the Egyptian gods their families have historically worshipped.

REFLECTION QUESTION: What events or even tragedies have revealed God as LORD in your life? How did you come to know that I am the LORD? How have you had to choose between worshipping YHWH and worshipping the “gods” your family has historically served?

Let my people go. Then they will be able to worship me. 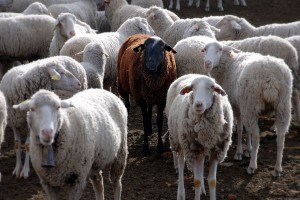 Second, God repeatedly commands Pharaoh, through Moses and Aaron, “Let my people go. Then they will be able to worship me” (Ex 7:16, 8:1, 8:20). Notice that there is something about being in Egypt that prevents the Israelites from worshipping. So, why can’t the Israelites worship in Egypt? That’s a great question. I can think of a couple reasons. The first is very practical. According to Genesis 46:34, the Egyptians abhor sheep and shepherds. Sheep are to Egyptians what pigs are to Israelites. But Israelites must offer sheep as sacrifices to YHWH, and as told in Ex 8:26-27, the Egyptians will find this detestable and most likely massacre the offenders. So practically, they can’t worship God in the way God has commanded them (i.e. spotless lamb sacrifices) so long as they are in a country where sheep are detestable. But even more than that, I think there are other reasons they can’t worship in Egypt. I think one of the main reasons is that they are slaves. It is hard to worship when you’re captive (especially to the false gods of Egypt). Remember, Pharaoh has increased the Israelite workload tremendously; maybe they are too busy or too exhausted to worship.

Lastly, it seems like the Israelites might be wondering if YHWH is actually the most powerFUL God since they are the most powerLESS people.

REFLECTION QUESTION: What is keeping you from worshipping? Is it possible for you to worship where you are? Are you so dominated by someone that worships false gods that it is destroying your ability to worship? Are you too busy or too tired to offer YHWH worship? Does your current life situation cause you to doubt YHWH’s power and care?

The magicians did the same thing by their secret arts. 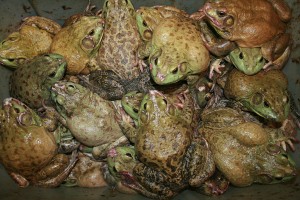 The third and fourth things sticking out to me are connected, like two sides of the same coin. The Egyptian “magicians” often mimic the miracles and plagues (staffs into snakes, and Nile into blood, and frogs), but when they do so they only compound the problem. I don’t know how they perform these wonders, but the Bible (even the New Testament) acknowledges that there are spirits capable of performing miracles, even the Devil, himself, performs miracles to trap men in the worship false gods. Still, what amazes me is that the magicians/priests actually make the problem worse. You’re in a palace with a spitting cobra, the last thing you need is 10 more spitting cobras. You’re in a country where all the water is blood, and you turn the only fresh water you can find into blood?! You’re in a country filled to the brim with frogs, so many frogs you can’t even cook dinner, and your priests actually make more frogs?!

If they wanted to show the power of the Egyptian gods, what the priests should have done was remove the plagues. If the Egyptian gods were more powerful or even as powerful as YHWH, the priests would have turned the snake into a worm, the blood back into water, and shepherded all the frogs back into the river! But instead, these priests and their false gods make the problems worse. They have power, but only the power to amaze and destroy. Tellingly, just after the magician priests bring up more frogs (8:7), Pharaoh calls Moses and Aaron to beg them to pray to YHWH to take away the frogs (8:8). He has to see the folly in making more frogs when what they really need is a solution to the frogs.

The LORD did what Moses asked.

The fourth observation is only YHWH ever abates the plagues. YHWH takes away every plague. Pharaoh repeatedly asks Moses to pray to YHWH to remove the plagues, and YHWH does. That is amazing grace, if I were in charge of the world, I wouldn't take the plagues away until the Israelites were all the way into the Promised Land. This is mercy, because pure judgment, would have destroyed Egypt like it did Sodom and Gomorrah. But, God wants the Egyptians to know that YHWH is Lord and is both just and merciful. So, it is YHWH not the Egyptian gods or Pharaoh’s public works that bring relief. AND PHARAOH KNOWS IT. Pharaoh’s petitions for prayer prove that he is realizing “I am the LORD,” but knowledge IS NOT faith. One can know God is God and not trust God. One can know Jesus is Lord, and still choose to be a self-led person, but it only compounds the plagues already present. For Pharaoh to submit to God, will cost him financially, and will require him to acknowledge that he was wrong religiously and politically. Perhaps his pride is keeping him from faith. Or perhaps he is presuming upon God's mercy, even though he has not intention of changing at all.

REFLECTION QUESTIONS: Where am I trying to fight fire with fire and only making problems worse? Where am I trying to solve problems “my way” instead of praying to God to fix them? Are there areas of my life where I know God is God, but I don’t live like I can trust him to lead my life? Are there areas of my life where pride keeps me from faith? Are their areas where I pray for God's mercy and forgiveness, but I persist in my stubbornness?

One of our Key Connections is the Family Connection that nurtures faith, and this quote by Charles Spurgeon (one of the best preachers ever) reminds us why... #d6family #MothersDay #familiesmakedisciples ...