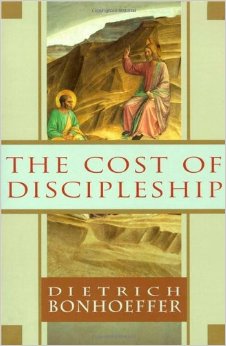 Posted in Pastor Andrew's Blog and tagged Bonhoeffer, Called to Die, Cost of Discipleship, Discipleship, Dying with Christ, Follow me, Take Up Your Cross.

The weather for Saturday is looking to be perfect picnic weather 😎. We hope to see you at our annual church picnic Saturday from 4-7pm at Lake Benson, Shelter #1 for some great food, fun games, and awesome fellowship!! ... See MoreSee Less

Polenta Elementary's snack cart got a big boost! The snack cart provides snacks for any child who doesn't have a snack at snack time during school. Our Mission & Outreach team purchased these snacks and delivered them to Polenta earlier this week to make sure the snack cart has snacks available for any child who might need one! Thanks to the Mission & Outreach team for purchasing and organizing this delivery! ... See MoreSee Less

All over the nation, our students are gathering at the flag pole to pray. In your time of prayer today, please join us in prayer for our schools and students.Father, please be with all the students and teachers participating in See You at the Pole today. Give them strength and courage to show your love and peace to all those they encounter each day. May this day of prayer start a revival in our local schools and introduce more people to your grace. We thank you for the freedom to gather to pray and ask for wisdom for our local and national leadership. It in your Son's name we lift up this prayer, Amen. ... See MoreSee Less

See You at the Pole is taking place at schools all over the nation tomorrow, including our community schools! Meeting times for tomorrow are:WJHS: 6:15amCvHS: 6:30amSwift Creek & CvMS: 7:00amPolenta Elementary: 8:00am*Check with your local school to confirm meeting time. This student lead time of prayer is just that, a time for students, faculty, staff, and parents to gather around the flagpole at your school and pray for the needs of the school and community. If you can't make it to a school tomorrow, we ask that you would consider joining the students in prayer from your location at the times listed above.Hope to See You at the Pole tomorrow!! ... See MoreSee Less